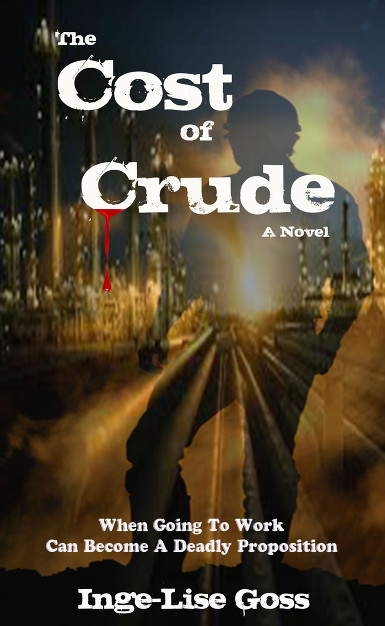 The Cost of Crude is a work of fiction– a modern-day murder mystery, set against the backdrop of two large-scale oil companies dueling for maximum profit. It is a page-turning thriller that continuously challenges the reader’s assumptions about what will happen next. As a dedicated book lover, I generally pride myself on the ability to anticipate a book’s twist or ending. That was impossible with this read. As soon as I thought I had a handle on this who-done-it, the author turned around and shocked me yet again. I was impressed by the author’s ability to craft a story so full of unexpected twists and turns.

The story immediately plunges you into the action–the prologue begins with a man, Kirk, tied up and injured at an unknown location by some unknown individuals. He desperately tries to escape when he realizes there is a second man also held captive near him. Kirk is hoping his attackers leave as he hears them discussing a worker who has been embedded in some organization for some time. His hope to escape is swiftly crushed when one of his attackers throws him into the ocean, a watery grave. Once the prologue is over, Kirk’s fate quickly sealed, we are introduced to a character named Julie. She is on her way into work at Wilton Oil, but it is not going to be an ordinary workday. Her bag is filled with various surveillance materials–microphone bugs and receivers, which she will use to eavesdrop on an important meeting the Wilton Oil CEO is having with executives from CT Oil and Gas(Wilton’s rival company). She is concerned about the prospect of the two companies merging and causing layoffs for her  and her coworkers.

Julie is shocked and appalled at what she is able to overhear from the meeting. When she returns to the conference room to retrieve the microphones, there is a man waiting for her with one of the surveillance microphones in his hand. He repeatedly asks who she is working for while she desperately insists she was only trying to learn about a potential merging of the companies. The man quickly escorts Julie out of the building.

We are then introduced to Gwynn and Cindy, Julie’s two best friends. They find it unusual that Julie has blown off an evening at the restaurant they had planned on meeting at.

Gwynn and Cindy are lamenting over the fact that Cindy’s boyfriend, the two are very much inseparable, has suddenly disappeared without giving any notice to Cindy that he would be leaving. Cindy is distraught, assuming the worst. Little do these friends know they would be in for some more bad news. The next day they are shocked to discover their friend Julie has died in a car accident. Gwynn is immediately devastated, and then suspicious. The events surrounding the car accident do not seem to add up, and to make matters more interesting, Julie’s grandmother has hired a private investigator to investigate the circumstances surrounding Julie’s passing.

Gwynn is an extraordinarily likable character. This author does a fantastic job at creating realistic characters who, by the end of the book, seem like people you know in your every day life.  Gwynn is fiercely strong, independent and knows what she wants. Her intelligence is disarming to her enemies and her strong will makes her a force to be reckoned with. She is the perfect person to solve a potential murder, especially one concerning her very best friend. She immediately clashes with the private investigator, Ruben. She is attracted to him, but he is concerned with making sure she is following his “orders”. To Gwynn, this is a little overbearing and she tends to not do exactly as Ruben says. His stubborn personality also comes into play when he refuses to move forward with any potential relationship, though they both share an intense attraction, because she is a client he is working with. This small romantic side-plot adds another dimension to the story as well as having the reader connect with each character on a deeper level. We want to see these two get together and this investigation had better not lead to either of them losing each other! I was rooting for them the whole book.

The biggest twists this story throws at you involve the person/persons actually involved in the murder. As well as the fact that there may or may not be several other murders connected to Julie’s. Why are all of these people who work for these Oil companies suddenly being silence? And by whom? Is Taylor’s disappearance involved in this as well? What could these huge companies be trying to hide? You will be asking yourself these questions, not to mention the exciting will they or wont they question concerning Gwynn and Ruben.

You will not be able to put this book down for a long period of time, each time you want to stop reading a new twist is introduced and will force you to keep on. I would recommend this book to anyone who loves a classic mystery or thriller or even just a good old-fashioned romance. This book has it all and will not disappoint.