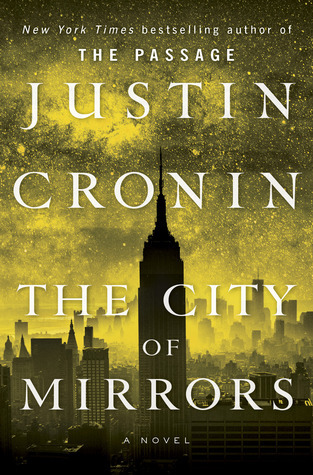 The City of Mirrors concludes The Passage trilogy by Justin Cronin, an epic saga on the struggle for mankind, humanity, and a fight against extinction. In the futuristic landscape of a barren world, the remaining survivors of a pandemic that unleashed lab-engineered vampires into North America fight to stay alive by killing the source. The main story line follows a band of young adults some seventy years after the initial apocalypse. They fight to bring an end to the horror after discovering what had happened to the world. The City Of Mirrors takes place long after they’ve become comfortable. And getting comfortable was their first mistake.

“We have mortgaged the planet and spent the cash on trifles.”

In Cronin’s world, a virus was brought into the U.S. within the body of an infected scientist who had been researching some new viral strain in Bolivia. Dr. Fanning was Patient Zero. Seeing its incredible effects on Zero, the scientists made a new viral concoction through his blood and infected twelve death row inmates. The virus had essentially given them super-human strength and power and turned them into mind-controlling vampires. Overpowering the guards through mind control, they escaped and laid waste to the world.

Each of The Twelve and Zero would either kill or turn their victims into lesser vampires known as virals. Each had thousands of virals under their full control. They all had their legions, their Many. And with each of the Twelve and Zero in possession of an army, North America was quickly destroyed.

“Every species, no matter how successful, eventually encounters a force greater than itself, and it was simply our turn. Others have argued that the wound was self-inflicted, the consequences on mankind’s rapacious assault upon the very biological systems that sustained our existence.”

In The Passage, we’re introduced to a group of young adults in First Colony, California. It’s some seventy years after the initial fallout, and these survivors have lived under the protection of high walls and bright lights. After Amy comes to them, a small child who was initially infected with the same virus in the test lab with The Twelve (not having aged a day in some seventy years), a journey is begun and they leave their dying city to find other survivors and to destroy the most dangerous of The Twelve. In The Twelve, now hardened by war, the group of friends and Amy bring down the rest of The Twelve.

In The City of Mirrors, Peter, Michael, Alicia, Hollis, and Sara are the only survivors from the original First Colony. But they live with hundreds of thousands of other survivors in Kerrville, Texas. The book first opens with our gang a few years after the downfall of The Twelve. The characters separate, and then it jumps about twenty years into the future. Our fresh-faced band of young-‘uns are now hitting their fifties. Peter’s son Caleb (named after the original Caleb, and adopted by Peter after Hollis and Mausami were killed) married Pim (Sara and Hollis’ adopted daughter), Kate (Sara’s biological daughter of rape) is widowed with two daughters. Peter has become the President of the Texas Republic while Michael and Alecia have vanished from society for different reasons.

Everyone assumed that Amy is dead, killed along with The Twelve. But all this time, she has been alive, hidden and encapsulated on her own accord while her body finished its transformation alongside Carter, one of the original Twelve (surreptitiously not killed and protected by Amy) who was always the  ‘good guy’, even in viral form. Greer knew that Amy was alive, as she called to him through her paranormal thought-calling ways. He helped keep her alive by feeding her blood, keeping her strong. She shared her secret with him, and Greer kept it for all that time, only telling Michael.

“Greer drew a long breath and let the air out slowly. ‘I know the virals are coming back, Michael’, he said, ‘because Amy told me.'”

While life is going on, Michael is busy repairing a twenty-first century wreck of a ship to act as Noah’s Ark after he discovers coordinates to an island he believes to be devoid of the virus and safe. Knowing Greer and Amy’s secret, he works on the boat for twenty years, hiring conscripts along the way. Alecia has an even more interesting story. She’s followed Zero’s voice to New York City where Fanning (Zero) has been waiting for her. Alecia is the only one out of her group who had been infected, but she never turned into a viral because Amy saved her with the serum used on her. Alecia is a kick-ass super-human with viral capabilities, but she is unable to kill Fanning. She discovers that it was one of Fanning’s Many who had originally bit her, which puts her under his control. She spends twenty years with Fanning under the promise that he will never attack her friends as long as she stays with him.

The city of Kerrville rests peacefully. The gates haven’t been closed in years, the lights along the perimeter no longer work, and people have moved out into the open to homestead, including Caleb and Pim. In the towns north of Kerrville, people begin to disappear. Entire towns turn into ghost towns in a nightfall. Alecia begins her race across the country on horseback, Amy comes from out of hiding, and Michael finishes his project capable of saving only a fraction of those in Kerrville. Most of the survivors are young – they’ve never even seen a viral, they don’t know the signs of an incursion, and they don’t know how to fight. Before Peter realizes that he needs to get his people to the docks to board the ship, it’s too late. The virals arrive in an unconquerable swarm.

I screamed. I screamed so many time reading this book. So many of the scenes are depicted in a cinematic way – I could see the carnage, feel the warnings, and all I could do was scream like a crazy cat-lady screaming at characters on the TV as if they could hear me. RUN! NO, THE OTHER WAY! WHAT ARE YOU DOING! OH MY GOD! NO! NO! NO! THEY’RE COMING!

Be prepared to lose more favorite characters – a lot of them. Once you get past the backstories and the world building (about halfway through), the rest is nonstop action and pulse-pounding terror. You don’t get a second to breathe. You don’t get to collect your thoughts. You don’t get to mourn.

The end will be a surprise. For the very end, which runs more as an epilogue, is absolutely, beautifully conceived. Brilliant.

We finally get the backstory on Fanning (patient Zero) and it goes back to his life, mostly his collegiate years, in the modern world as we know it. It is a beautifully written piece about a Harvard boy’s transition from child to adult. His story is a literary segment that tells mostly of his formative years in college with grief, friendship, love, confusion, betrayal, and a bond created that would eventually lead not only to his demise, but the demise of an entire world. The monster is humanized.

“Carter knew that man, knew he wouldn’t rest until the whole world was a mirror to his grief.”

Alecia has always been my favorite character and so when she came back to Kerrville with her own goddamn army to help fight alongside her people, I was incensed at her treatment by Peter and Sara. These were the original First Colony members, tight as could be, and they treated her like garbage after everything she did to protect them, even putting Amy above her. This was the only thing that made no sense to me. It didn’t ring true.

The Passage series is great literary horror. Each book is a double-decker tome, but they are well worth the read. And The City of Mirrors is the best of the three.

The City of Mirrors
by Justin Cronin