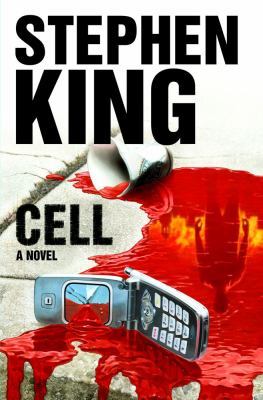 King’s quasi-zombie thriller Cell is coming soon to a theater near you. Featuring Samuel L. Jackson and John Cusack, the same dream team from King’s 1408, survivors left from a cell phone pulse try to understand the nature of the deadly ‘phoners’ who have turned murderous. I just finished the book only to learn of the movie which has already been made. And so naturally, I’m pretty excited. Hardcover | Scribner | 2006 | 355 pp

The story begins in Boston with Clayton Riddle, a graphic artist who finally landed a big deal on his portfolio. While dreaming about breaking the news to his family back home in Maine, he gets in line at an ice cream truck and that’s when things go down pretty fast.

The woman in front of him attacks the ice cream truck driver, a teenage girl attacks the woman, a Duck Boat goes on kamikaze mission with dozens of screaming tourists on board, people are jumping out of windows, screams are everywhere, explosions can be heard. It was as if someone turned on a switch, and half of Boston’s population went berserk, either killing themselves or killing others.

While Clay is trying to render aid, a curious bystander by the name of Tom McCourt gets involved. While they are watching the town implode around them, one of the infected sees them and attacks. They’re saved by a police officer who promptly kills the attacker and tells Tom and Clay to get inside and take cover, these people are everywhere.

And this is just in the opening pages.

Just before people went loco, Clay noticed that the ones who went wild had just been using their cell phones. A lot of other people draw the same conclusion. It must have been some pulse originating from the cell phone, an item that just about everyone carries. And when people started dying, more and more instinctively reached for their phones to call loved ones, only to succumb to the same pulse. But where is the pulse coming from? Who started it and why?

Clay and Tom manage to rescue a young girl who had just killed her mother in self-defense and they take cover in Clay’s boutique hotel. After a while they come to discover that the phoners don’t go out at night, and so that’s when they leave. Clay has to get home to find out the fate of his family.

During their travels, they begin to notice some peculiarities about the phoners. After the initial rampage, the phoners who were left rambled around in herd-like processions, gathering food during the day. They would never go inside a building and wouldn’t go out at night. When they make it to a private school and meet up with a professor and his one surviving pupil, they find out just what the phoners are doing at night.

Each revelation is creepier than the last: telepathy, dream connections, voice control, and a phoner spokesperson they call the Raggedy Man. The phoners are working toward something, and after Clay and Tom make a stand against them, special arrangements made by the phoners force Clay’s group into front row seats for the final act.

As always, the King can do no wrong. But you’ll find more questions than answers at the end. He does that on purpose, you know.