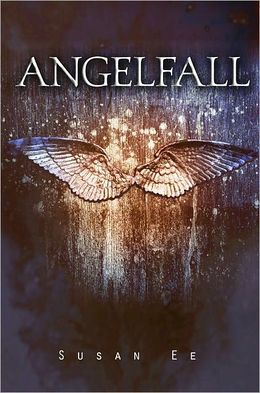 Angelfall is the first in a series of young adult post-apocalyptic fiction where world destruction has been caused by an army of warrior angels. This novel was a Cyblis Award Nominee for Fantasy & Science Fiction but its popularity truly spread by word of mouth. The first book in the Penryn & the End of Days series, Angelfall became a GoodReads favorite in no time, and eventually became a bestselling series. I was wary of getting into a “hyped-up” series, but the reviews were true. I absolutely loved it. Amazon Children’s Publishing | Hardcover | 2012 (first published in 2011) | 283 pp

The story begins with teenage Penryn and her family getting ready to be on the move. It’s been six months since the end of the world by killer angels and they have no choice but to leave their family home in search of food and safety. It’s just Penryn, her younger, wheelchair-bound sister Paige, and her batshit-crazy mother. Penryn is the one who must maintain control. Before they can reach the relative safety of a less populated area, angels fall from the sky.

Penryn witnesses an angel’s wings being ripped off by the others in some act of punishment. Before they can sneak away, they are noticed and Penryn has no choice but to act. She tells her mother and sister to run/wheel while she tries to aid the fallen angel as a distraction. The rouse partially works, but Paige is taken by one of the angels.

With Paige gone and her mother nowhere to be found, Penryn takes the fallen angel to a safe building and tries her best to heal him. It isn’t an instant friendship, but they come to an agreement. His name is Raffe and he wants his wings sown back on. He agrees to take her to the Aerie (the angel stronghold in San Francisco) and help find her sister since she helped him stay alive. But he isn’t promising anything. She’s just another “monkey” to him.

There are so many unexpected surprises in this book – so many things to love.

First is the batshit-crazy mother. She isn’t just daffy or eccentric – she really is clinically insane. She’s terrifying and simultaneoulsy hilarious. She’s always been terrified of demons and has an obsession with parents who have killed their children because “the devil made them do it”. She even made a sweet little scrapbook about it featuring all of the grisly newspaper clippings, and then left it open on the kitchen table. When Penryn saw it, her mother asked her if she was still taking her martial arts classes. Penryn, assuming that her mother was responsible for Paige’s “accident”, never missed a class. On top of that, her mother always seems to be one step ahead of Penryn in the journey, and people are terrified of her, but we aren’t told why. Oh, what fun the imagination has with this character!

Second is Penryn. Like many YA novels that feature strong young women, Penryn isn’t trained in the first part of the story to become some badass. She already is. She is trained in several forms of martial arts to protect herself from her mother – as it’s implied. She’s courageous and loyal, and when her sister is taken, she’s going to do anything she has to in order to get her back, even make a deal with the enemy. And she never cowers.

Third – it unexpectedly veers into H.P. Lovecraft-style horror. The angels, in some sort of mad scientist scheme, are operating on children, and turning them into terrifying, stitched-up little monsters. It blew my mind.

There are other little unexpected delights: the 1920’s style of clothing and music preferred by the angels, the difference in appearance of angel wings, and agnostic angels. Yup – agnostic angels.

Angelfall is riveting, shocking, unputdownable, and breaks the mold of traditional YA fantasy. I can’t recommend this one enough. I’m off to the second book!